A green-thinking Royal Naval sailor has made a splash at Plymouth Royal Naval Base by reducing costs and the carbon footprint of a diver training tank.

Chief Petty Officer Chris Springett, an engineer at Devonport Naval Base Southern Dive Unit, has won a coveted MOD award for dramatically improving the tank’s water heating and cleaning treatment. The scheme has been adopted and is saving the naval base in energy and fuel costs, water use and increases the life of parts.

The new system with new equipment and operating procedures saves the MOD about £190,000 over three years and helps the naval base meet it carbon dioxide emission and sustainable energy use targets.

The GEMs award scheme rewards bright ideas for energy and efficiency savings in the MOD. The best ideas are further rewarded by a ceremony in London where Chris attended the 2013 GEMS Recognition Awards Ceremony and was presented with a Certificate of Recognition from the Chief of Defence Staff General Sir Nicholas Houghton and the MOD Permanent under Secretary Jon Thompson. The ceremony rewarded eight categories.

He said: “I came up with the idea after completing a civilian swimming pool maintainer’s course where I realised how archaic the control of the dive tank filtration system was. “It was inefficient because it was an old system with no feed-back or temperature control which wasted water, energy and the chemicals used to treat the water.’’

His business case was accepted and are predicted to reduce the dive unit’s headquarter’s carbon emissions by 45,000 tonnes over three years. He said: The improvements save water and energy in heating and compressed air and save wear and tear on the system. We now use less chemicals to treat the water to make it hygienic and also reduce labour costs.’’

“Once into the mechanics of the system I realised further large-scale efficiencies could be easily achieved for little capital expenditure whilst maintaining the system integrity. This manifested itself in large water /electrical and chemical dosing cost reductions as well as savings in respect of our carbon footprint with further reductions to heating and associated equipment costs.’’

It is hoped the improvements can be used on other MOD sites to make similar savings.

He said the GEMS Award was a recognition of success in driving down costs and encouraging people to put their ideas into practice: “I am lucky enough to be in a organisation that recognised and acted upon this proposal very quickly.’’

Chris’ Royal Naval career began in 1981 as a direct entry artificer (engineer) completing training at Portsmouth shore bases HMS Sultan and HMS Collingwood achieving chief petty officer status on the warship HMS Brilliant in 1985. He also served on HMS Ambuscade, HMS Brazen and HMS Dumbarton Castle and spent six months as a UN Military Observer in Cambodia. He then served with 539 Assault Squadron Royal Marines in Plymouth and worked in Gibraltar and the Southern Diving Unit in Devonport.

The GEMS scheme encourages all MOD civilian and service personnel, including ex-employees, to make suggestions for improving efficiency and organisation anywhere within the department. Those who submit suggestions which are implemented may receive a financial reward, where it can be demonstrated there is improvement to the organisation, management or delivery of services by the MoD or Armed Forces. Currently, about 40 per cent of the suggestions that GEMS receives are implemented, saving the MoD about £12m each year. The intangible benefits are estimated to be much higher, at about £200m each year.

More than 2,000 suggestions a year are submitted to the scheme. GEMS is seen as the ‘best in class’ ideas scheme in the private and public sectors. UK companies such as BT and international companies like Dubai Aluminium seek to emulate the GEMS format. 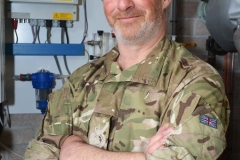 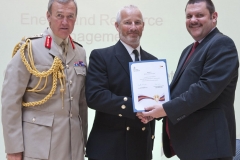