Sailors from HMS Argyll followed in the footsteps of Britain’s greatest polar explorer when they recreated Sir Ernest Shackleton’s legendary trek across the snow and ice of South Georgia.

A dozen-strong team from the Devonport-based frigate volunteered to make the crossing of the South Atlantic island in the depths of the Austral winter – just as Shackleton himself did in May 1916.

In doing so, Sir Ernest raised the alarm that the men of his Trans-Antarctic expedition were trapped on Elephant Island, 800 miles away, ensuring they were subsequently rescued.

Ninety-seven years on and Argyll’s operations officer Lt Cdr Simon Cox set his shipmates the challenge of repeating the final leg of his journey: from Fortuna Bay to the now abandoned whaling station at Stromness to test not just their physical strength but their command and leadership skills.

The expedition was opened up to the entire ship’s company – 190 strong – and there was no shortage of volunteers, but numbers were limited to 12. The chosen dozen set about preparing for the task by researching the route, weather, navigation, wildlife and also planning what to do in an emergency. And then they were flown into Fortuna Bay, on the north side of the island, by Argyll’s Lynx helicopter – callsign Eagle 1 – to begin the trek.

The seven mile route to Stromness required them to work their way past fur seals, king penguins and elephant seals, scale several snow-capped peaks, avoid avalanches, hidden lakes and rivers, and descend past Shackleton’s waterfall and into Stromness harbour.

Once they reached Stromness the 12 explorers had the chance to assist British Antarctic Survey (BAS) scientists.

Trekking another two miles over extremely rough terrain and overcoming steep mountain sides, the team had the task of moving some of the scientists’ kit from one of its remote sites back to the headquarters in South Georgia’s ‘capital’ Grytviken for safekeeping over the rest of the winter.

That work meant manhandling a generator, survey equipment and food stores from the site to the nearest beach so Eagle 1 could winch it aboard Argyll for onward passage to Grytviken just 18 miles away by sea.

“There aren’t many jobs you get to do this kind of stuff. It was an exhilarating day’s work in the Royal Navy with a superb group of sailors demonstrating outstanding teamwork in one of the most beautiful places on the planet. It doesn’t get much better than that,” said Lt Cdr Cox.

PO Chris Carte, one of Argyll’s operations room team, added: “Using real-life heroes like Shackleton as an inspiration shows what can be achieved through determination and leadership. Challenging activities like this are key to developing individual leadership styles.”

After Eagle 1 had ferried the BAS equipment it returned to the shore to pick up the 12 explorers and return them to the ship, offering them yet more stunning views of the island.

“This event epitomises the team ethos in HMS Argyll. It’s one of a series of command and leadership challenges we’ve set throughout the deployment to enhance the ship’s company’s personal development to prepare them for their onward careers.”

Argyll is in the later stages of her wide-ranging Atlantic deployment which has taken her to much of western and southern Africa, and Britain’s South Atlantic territories. She’s due home in Devonport in September. 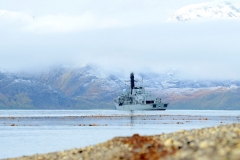 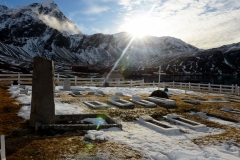 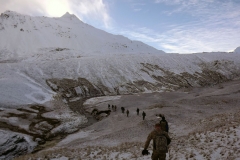 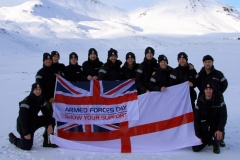 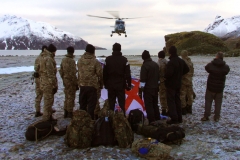