Media students from Plymouth have been touring the city’s naval base ahead of a month-long study project on the site.

The group of teenagers, studying the National Extended Diploma in Media were treated to a rare view behind the Devonport Naval Base wall to give them an insight into the workings of the vast site before they embark on producing course work relevant to the base and its work.

For most of the students this was the first time they had been inside a naval base and seen warships close up. They had a tour of the advanced frigate HMS Sutherland which last year conducted a successful maritime policing patrol deterring piracy, smuggling and other illegal use of the busy trade routes at sea.

College lecturer Rob Chadwick, Academy Manager, Media & Digital Industries, said: “This is a fantastic opportunity for our students. I hope it will be a partnership that can benefit everyone for years to come.”

They were also shown the naval heritage area including the submarine HMS Courageous and enjoyed lunch in the spectacular historic officers’ mess wardroom.

Student Stephen Roberts said: “The visit to the Naval Base was pretty amazing and the opportunity to go on board a submarine was fantastic”

The project is the first of its kind in the naval base – an example of the close working relationship between the college and the Royal Navy in Plymouth. It is hoped this pilot will expand to give further study opportunities to City College students.

Commander Andy Coles, the Devonport Naval Base Executive Officer, said: “This is the beginning of a new engagement process which we hope will continue to grow. We are delighted to have the opportunity to work with students of City College with us. The students are the bright economic future of the city and the Royal Navy has a lot in common with a college with our motivated high-achieving young work force.”

“As a major employer in the region with expanding links into the community and good neighbour of the college we are pleased to provide a stimulating environment working for the students. We trust they enjoy their study period here and use their marketing and media skills to our mutual benefit.’’ 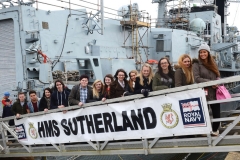 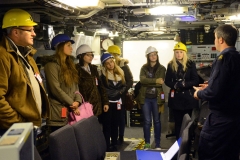 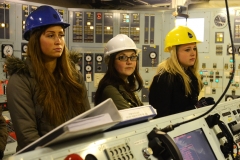