HMS Sutherland belched fire and fury on the ranges off Gibraltar during gunnery exercises in the opening moves of her six-month deployment.

The Rock was the first port of call for the Devonport frigate as it makes its way towards the Indian Ocean to take over from HMS Westminster on a counter-terrorism/counter-piracy patrol.

With the 30mm cannon set to automatic, the so-called Fighting Clan shoots at targets on the sea off Gibraltar – the first port of call of HMS Sutherland on the way east to deal with the scourge of international terrorism, piracy and smuggling.

The Devonport-based frigate conducted the gunnery with Army experts in support.  The gun can fire up to 200 rounds a minute; a shell leaves the muzzle travelling at around 3,500 feet per second – 2,386mph or three times the speed of sound.  Which means it reaches its maximum range three miles from the Type 23 frigate in under five seconds.

The live firing was part of a series of naval gunfire support exercises with the Army’s 148 Battery Royal Artillery, as specialist observers who also help direct the guns of the Navy in time of conflict – as they did with HMS Sutherland off Libya 12 months ago.

The main 4.5-inch main gun was also fired up with shells travelling a little slower at 2,500 feet per second – 1,700mph or twice the speed of sound, but travel a lot further (about 12 miles) and pack much more punch.

The exercise allowed the 200-strong ship’s company to build on the two intensive spells of training they completed off the South Coast under the wings of the Flag Officer Sea Training organisation during the past six months in Plymouth.

Once alongside in Gibraltar itself, some of the more active sailors ran the famous rock race – run from the ship to the top of the Rock (2.7 miles, climb 1,300 feet, avoid the apes).

One member of Sutherland’s Royal Marines detachment decided it would be a challenge to complete the race running backwards (he reached the top in under one hour) and a couple of shipmates both lugged a heavy bag all the way to the top.

To give military and civilian staff at Commander British Forces Headquarters an insight into life aboard a cutting-edge Type 23 frigate, Sutherland offered the opportunity for them to join the ship at sea.

HMS Sutherland is continuing her passage east through the Mediterranean to relieve sister HMS Westminster in the Indian Ocean as part of the international maritime security effort.

Commander Al Wilson, Sutherland’s Commanding Officer. Said: “Gibraltar is an iconic visit for sailors of the Royal Navy and always keenly anticipated,” “My ship’s company enjoyed the wide variety of sporting and social activity that Gibraltar has to officer, as well as utilising the time to consolidate mission-focussed training ready for operations.” 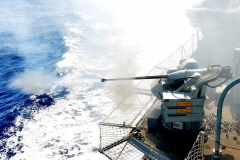