Providing a key part of the surveillance effort in support of the International Security Assistance Force (ISAF) in Afghanistan, 854 NAS and its Sea King Airborne Surveillance and Control helicopters (SKASaCs) has been based at Camp Bastion in Helmand Province. Conducting hundreds of missions, the men and women of 854 NAS have proven their worth time and again. Many miles from the sea and what might be considered their ‘normal’ operating areas, the SKASaCs are highly reactive helicopters, able to assist ISAF troops at very short notice in the quest to make this troubled country a more peaceful and safe place for the Afghan people.

The SKASaC is fitted with a powerful and sophisticated radar that provides valuable battlefield reconnaissance and targeting information in land operations around Southern Afghanistan. Developed to protect a Fleet of ships at sea, they are known as ‘The Eyes of the Fleet’. But with the front-line SKASaC Force (854 and 857 Naval Air Squadrons) having first entered Afghanistan in May 2009, they can also now claim to be ‘The eyes of the desert’. Well-attuned to this new task, the aircrew know exactly what they are looking for: once found, they pass this information on for ground commanders to swiftly act upon. Enjoying extraordinary successes, during the period of last summer alone they made numerous ‘finds’ totalling over 7 tonnes of explosives which would have otherwise been used to make IEDs, and thousands of kilograms of drugs bound for streets around the globe. Of course, they are but a part of a larger ISAF team that enable these hauls to be made and 854 know only too well that those who live in the area or patrol the ground in Helmand still face danger. However, they are keenly aware of the real difference they are making, allowing an increasing number of people to go about their daily lives in greater safety.

Having split the squadron’s personnel into two halves, 854 deployed in late November 2010. To sustain continuous operations, all members of the team have spent upwards of 8 months away in this period, undertaking 3-4 months tours followed by a similar period back in UK before returning to the fight for a further tour. Many have done still more time away: 857 NAS had planned to replace them at the end of 2011 but were necessarily delayed as they were deployed aboard HMS OCEAN for Operation ELLAMY (the UK’s codename for the Libya campaign), so 854 had to remain in Afghanistan until finally relieved this week. So, in the last year these two squadrons have coped admirably with the heat and dust of a land-locked country whilst also deploying in their more traditional role in the maritime environment for operations off Libya.

Commander Pat Douglas, Commander Sea King Force said: “Having handed over to 857 NAS, 854 squadron return home after 15 hard months of hard work in Afghanistan. They can be truly proud of what they have achieved; from the 2, 500 odd hours flown in theatre and the numerous hauls of drugs, weapons and explosives, to the extraordinary serviceability of their aircraft, they have surpassed expectations at every turn.”

A small, close-knit part of the Fleet Air Arm of the Royal Navy, this community continues to operate wherever and whenever it is required, often at short notice, always aware that they provide ‘The eyes’ that make the difference. Back at their base at RNAS Culdrose in Cornwall, Captain Willy Entwisle, the Commanding Officer of the base, welcomed the squadron home before sending them off for some well earned leave. 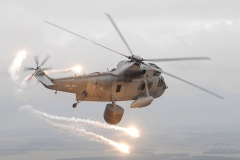 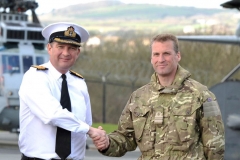