Among the 2000 service personnel at Royal Naval Air Station Culdrose, there are around 70 RAF personnel working in Air Traffic Control, the Fire Section, Sea King Force, and Merlin Force, (mostly in the Merlin Depth Maintenance Facility) and the UK Military Flying Training System at 750 NAS.

On Tuesday 20 March 2012 16 members of the Royal Air Forces Association from Falmouth, Penzance and Camborne/Redruth branches visited RNAS Culdrose to witness the work and some of the roles of the air station. They visited 771 Naval Air Squadron and were briefed on the Search and Rescue aspects of the squadron’s tasks and in the afternoon visited the Merlin Depth Maintenance Facility, seeing Merlin helicopters in various states of deep maintenance.

The visit concluded with a visit to 750 Naval Air Squadron where Royal Naval Observers are trained on the King Air Avenger aircraft to use the latest radar and electronic equipment to prepare them for operational deployment in military aircraft around the world.

The Royal Air Forces Association (or RAF Association), is a membership organisation and registered charity that provides welfare support to the RAF Family. The RAF Family includes all serving and ex-serving personnel and their dependants. 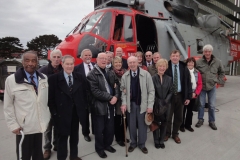