FOR the first time one of the Royal Navy’s new Type 45 destroyers has used two helicopters on front-line operations.

HMS Dragon doubled her effectiveness for two months flying not the usual one, but two Lynx helicopters from her flight deck.

The destroyer, on her maiden deployment, left Portsmouth in March with one onboard from 815 Naval Air Squadron aboard.

But she also carried a spare air and ground crew – ready to look after HMS Monmouth’s when Dragon relieved the frigate to take over on Gulf patrol duties.

Monmouth’s helicopter was flown across and safely stowed in Dragon’s hangar where she underwent maintenance following her six months in the region.

Aircraft maintainer PO(AET) Matt Ferris said: “Dual aircraft operations has been a busy time for all.

“The maintenance hours were triple that of a normal flight due to Monmouth’s helicopter staying in theatre, and keeping up with the high flying tempo whilst having two aircraft.”

Having two Lynx allowed one aircraft to carry out the ‘day job’ of surface searches and support to board and search operations, while the second helicopter carried out training with the Royal Marines sniper team, rapid roping, passenger transfers and, most importantly, picking up mail to bolster morale among the 235-strong ship’s company.

And when a call came through from minehunter HMS Quorn that she needed equipment flown in from Bahrain at the same time as a transfer of American sailors was planned – it meant both helicopters were scrambled.
Within two hours the helicopters were both back in the hangar being prepared for the next days tasking having completed their double mission.

“It was a great opportunity to actually apply the training we receive in the UK and put it into practice,” said pilot Lt Rob Gleave as the two months aboard Dragon came to an end.

He said: “Having two Lynx aircraft embarked on Dragon for this short period has allowed valuable experience to be gained and lessons learned throughout the ship which have been captured for the future.” 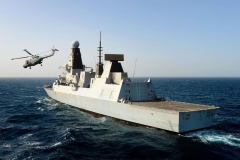 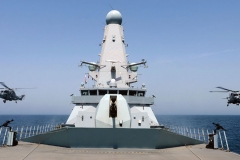 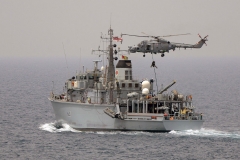 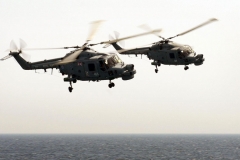