HMS Argyll has become the second Royal Navy warship in as many months to smash a target out of the sky with her Seawolf missile using the Navy’s new 3D radar.

Firing as part of their pre-deployment tests on the South Coast Exercise Areas, there was a brief, bright flash of fire as a Seawolf erupted from its silo on the frigate’s forecastle, striking a flying target seconds later.

The successful firing not only confirms the ability of the new 3D Artisan radar system, but also HMS Argyll’s readiness to defend herself against air attack. Artisan tracks the target at long range before handing over to Seawolf’s trackers to ensure the missile finds its foe.

Artisan – also known as 997 in Royal Navy circles – is being fitted to all the Navy’s Type 23 frigates along with the two new Queen Elizabeth-class aircraft carriers. It will also be the primary radar of the Type 26, which is due to replace the Type 23s in the coming decade.

“I think the launching of a Seawolf missile is an awesome sight,” said HMS Argyll’s Navigating Officer Lieutenant Craig Clark.

“We have to ensure no craft are within range before we fire and the watching craft said to us on the radio that the firing was ‘quite the spectacle’!”

The frigate’s Commanding Officer, Commander Paul Hammond, added: “The performance of both 997 and Seawolf was very impressive.

“This missile firing marks the end of a challenging regeneration period for my ship and ship’s company. We are now fully trained and in the best possible material state for our Caribbean deployment.”

Every Royal Navy frigate carries out a launch of a Seawolf – the principal air defence of the Type 23 class of ships – before deploying.

In the case of HMS Argyll, that will be to the Caribbean – although her foes will be drug runners, as she weighs into the international fight against narcotics smuggling, and the elements as she will be on stand-by to provide assistance in the event of a natural disaster during hurricane season.

Although in service for more than 30 years – it saw action in the Falklands in 1982 – Seawolf has been updated regularly throughout its life to meet the latest threats.

Weighing 82 kilogrammes and is taller than the average man at 1.9 metres, it accelerates to 3,67kmh (2,284mph) – three times the speed of sound – in a matter of seconds.

As for Artisan, it can track up to 800 targets simultaneously, whether they are 200 metres away – that’s roughly the width of the entrance to Portsmouth Harbour – or 200 kilometres (125 miles) away.

Note: The clip below is HMS Iron Duke firing a Seawolf. HMS Argyll is also a Type 23 ‘Duke’ Class Frigate. 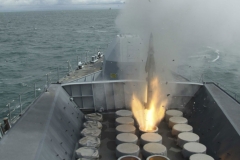