HMS Bulwark, the RN flagship and amphibious command and control vessel took part in Exercise Olympic Guardian earlier in the week, operating as the civil authority maritime command and control HQ at sea near the Jurassic coastline of Dorset, close to the 2012 Olympic sailing venues of Weymouth Bay and Portland Harbour. Today HMS Ocean exercised on the Thames.

The first phase of the exercise involving HMS Bulwark saw key staff from the Dorset Police Authority and 26 other police authorities working alongside teams from the Maritime Coastguard Agency, RNLI, regional civil authorities, representatives from the London Organisation Committee for the Olympic Games and military forces.

The exercise marks the culmination of over a year’s planning and preparation to provide competitors and the general public with a safe, secure environment in which the Olympic sailing events can take place in July and August. Approximately 600 military personnel and 80 civilians trained over the week at sea. The civilian organisations provided many experienced operational controllers to support the Olympics operations team embarked in the large command and control facilities available on HMS Bulwark.

HMS Bulwark commanding officer Captain Alex Burton and the man responsible for all the military assets operating in the Dorset maritime area, offered an insight into the range of support capabilities available and added his own message of support and reassurance:

“We’re extremely honoured and lucky as a nation to be hosting these International Olympic events. HMS Bulwark’s task is to support the policing operation in a discreet manner with the provision of capabilities and resources not available to British policing. Working in a multi-agency environment is not new to the Naval Service; we regularly exercise with other nations’ forces and can provide military aid to civil authorities in one of our resilience support roles. Our military planning teams have established a strong and effective working relationship with Dorset Police over the last year. It’s always rewarding to train and exercise together to fully understand the environment we’ll be working in this summer. Together we’ll deliver a safe and secure Games in the region, it’s going to be a spectacular show.”

Together, the Olympic Guardian teams exercised a comprehensive integration of multi-agency communications systems and worked on a common understanding of operational procedures in the maritime environment, while also coordinating the surface and airborne assets, military forces and liaising with the land-based logistics support facility.

VIP guests and media joined HMS Bulwark to witness elements of the exercise serials aimed at protecting the Olympian competitors, spectators and infrastructure from any disruption. Assistant Chief Constable ACC Adrian Whiting is the Strategic Commander for the Olympic Operation in Dorset and will be based ashore at the county’s emergency HQ. On his third visit to the ship to witness the progress of the exercise, he provided a full brief to the assembled media on the intent of the exercise

ACC Whiting said: “This summer sees a once in a lifetime event for us here in Dorset. The Olympics 2012 sailing venue is also a public safety policing and security operation that we’ve been planning since 2005, when we assisted with the preparation of the successful national bid to host the Olympics. Dorset will see a huge increase in visitors coming by land or by leisure craft at sea this summer. With the additional resource provided by the military and civilian agencies, we are able to offer the right level of security at our Olympic venue. I really would encourage the public to make every effort to come to Dorset and see the Olympic sailing that will be hotly contested and very enjoyable. You should have a great time and we look forward to seeing you in Weymouth the summer.”

“HMS Ocean is the largest ship in the Royal Navy and is ideally suited to the task of supporting the Police in providing security for the world’s largest, most famous sporting event.

“Everyone onboard is proud to be involved in the Olympic Games and thrilled to bring our ship into the centre of London for all to see at such an important and exciting time for the city.”

At 18000 tonnes, Bulwark is one of the Royal Navy’s largest ships. Designed as a troop carrier, she has a regular ship’s complement of some 320 crew which can swell to over 1000 with the embarked forces. Capable of transporting, deploying, sustaining and recovering troops with their equipment and vehicles, she is fitted with the most modern combat support system. 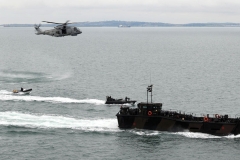 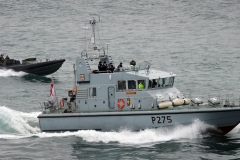 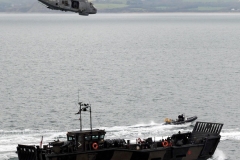 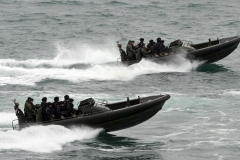 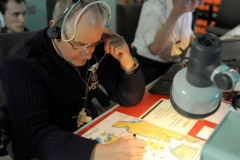