A rapturous welcome from cheering banner-waving families greeted the sailors of the Royal Navy frigate HMS Montrose (Friday 11th) for their home-coming to Plymouth from a 6.5-month deployment to the South Atlantic.

The ship sailed into Plymouth Naval Base to a seven-gun salute with 29 Commando at Plymouth Citadel. HMS Montrose and 29 Commando Royal Artillery have shared a long affiliation and a Scottish lone piper will play on the ship’s bridge wing.

A crowd of over 700 cheering families and friends and Plymouth’s Royal Marine Band hailed the crew from flying the flag as a significant reassuring naval presence to the UK’s Overseas Territories as the Atlantic Patrol Task South ship protecting and promoting UK interests in the South Atlantic Ocean.

Among the happy crowd on the jetty waiting for her father Warrant Officer Glen Harris was Jude White, aged eight weeks, who was born during the ship’s deployment. She was in the arms of her mother Tracey White until scooped into his arms by Glen Harris as he stepped of his ship. Glen, of Torquay, said: “It is lovely to see Jade again, she was only two weeks old when I left her. I was allowed to fly home from South Africa for the birth, but hard to tear myself away again. She has grown in six weeks and looks very well.’’

Leading Steward Jason Bradshaw was overwhelmed by the welcome from his extended family nieces Tiffany, Tamzin, 10, Jade, 12, and Chloe, nephews Daine, 5, and Ronan, 8, and daughters Macy, 12, all from Ipswich, and Caitlin, from Helston, Cornwall. His brother Craig and Regan and sister Heidi were joined by his girlfriend Celia and his mum and dad Christine and Gary. Celia said: “It’s a true family welcome. It’s fantastic to see Jason again. I have been counting every day down since he left.”

Leading seaman Matthew Gibson, of Plymouth, was hugged on the jetty by his wife Jo and their children Emily, 20 months, and William 6 months. Jo said: “It’s been hard work bringing up two young children. Matthew was allowed to stay behind to see William born. It’s great to have him back.”

Leading seaman Sean Starkie was greeted by his wife Kerry and their first child Jessica, 4 months. Sean said: “It was so important for me to see Jessica born before joining the ship on deployment. But I could not wait to see her again. She has grown a lot. The deployment was also very good with highlights being New Orleans and seeing the basketball and the cricket in Bermuda.”

The ship’s commanding officer Commander Jonathan Lett said: “Having navigated over 35,000 nautical miles, patrolled in three oceans, visited five continents and six British Overseas Territories there is a real sense of achievement amongst my ship’s company. From the frozen wastes of the South Sandwich Islands to the tropical paradise of Bermuda we have faced some significant challenges but the team can be justifiably proud of a job well done.”

He added: “My ship’s company are clearly glad to be home and back with their families after six and a half months away. I am fully aware that much of what we achieved would not have been possible without the support of our loved ones. After a long deployment it is vitally important that everyone has the opportunity to take leave, spend time with their families and friends and essentially re-charge their batteries in advance of the next challenge.”

HMS Montrose deployed on a wet and windy 24 October last year, and was waved off from Devil’s Point by nearly 200 family and friends who braved the late autumn weather. Since then she has travelled 35,336 miles and visited 13 different ports. She has also navigated in and around interesting locations, including rounding Cape Horn, patrolling sub-Antarctic Islands until blocked by ice and then finally transiting the Magellan Straits and the Panama Canal.

On Ascension Island 30 sailors completed the Dew Pond Run. One of Runners World Magazine’s “twenty runs to do before you die,” this arduous 7 mile course takes runners from sea level to the summit of Green Mountain and is certainly not for the fainthearted. HMS Montrose was the first Royal Navy warship in six years to visit St Helena which can only be reached by sea.

This theme was upheld during the ship’s visit to New Orleans to mark 100 days to the start of the London 2012 Olympic Games by conducting a 100 metre dash along the jetty and to take part in the commemoration of the 1812 war. Alongside ships from the USA, France, and Canada as well as tall ships from Ecuador, Indonesia and the US Coast Guard, Montrose opened herself up to some 2,300 visitors over a course of a week and her sailors were welcomed both ashore and by the other participating navies.

In the Falkland Islands the crew visited residents, learned about the wildlife and voluntarily renovated war memorials prior to conducting Services of Remembrance. The journey down to South Georgia and the South Sandwich Islands was one of the most memorable parts of the whole deployment.

Commander Lett said: “South Georgia and the South Sandwich Islands are some of the most unique and beautiful places on earth. The variety of wildlife and harshness of the environment combine to ensure that no-one who has visited will ever forget the experience. It is also important for those who are resident on the Islands to know that we can and do reassure them of our presence and that they are not forgotten in such a remote location”.

HMS Montrose has been away during Christmas and Easter but did not prevent the crew from doing their best to mark the occasions in traditional style. Four babies have been born to members of the crew and two people have become engaged. The ship burnt about 2,703 tonnes of fuel – enough to fill 53,000 family cars, consumed 56,452 Kgs of food in the form of 111,120 meals and received 670 sacks of mail – over three sacks for every sailor on board.

Major Jon Cresswell from 29 Commando said: It is with great pleasure that once again we are able to welcome our affiliated frigate and colleagues from HMS Montrose back after their challenging deployment to the South Atlantic. Firing a salute to HMS Montrose across the waters of Plymouth Sound is always a brilliant spectacle for the City of Plymouth. We very much look forward to welcoming HMS Montrose home as part of our larger Regimental Family in this very special year where we celebrate our fiftieth anniversary as Commando Gunners and look forward to the ship’s company joining the party. “

The crew will have a much needed period of leave and the ship will undergo an intensive maintenance package before returning to operational duties later in the year. 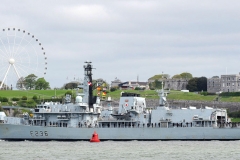 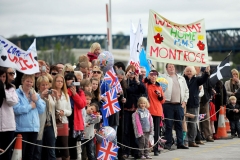 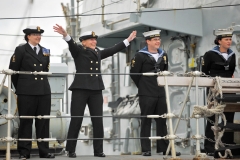 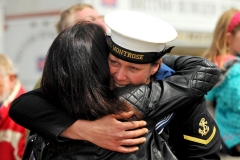 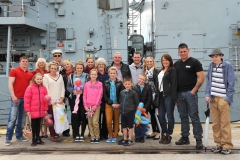