The Plymouth warship HMS Somerset has been at the centre of an advanced course for the next generation of warfare officers.

HMS Somerset has spent the week at sea on complex war-fighting exercises designed to test skills of the next generation of Royal Navy principal warfare officers as the ship became a dynamic floating classroom.

Under pressure students of the 13-month long course took part in the 96-hour assessment where they became extra members of the ship’s crew taking part in challenging war scenarios culminating in the legendary ‘Thursday War’.

HMS Somerset’s captain, Commander Mike Smith said: “It’s been an important week for developing the next generation of warfare officers, both the students and my crew gained a great deal from the time spent together in a high pressure environment. Passing on our knowledge and seeing the students’ progress has been highly rewarding.”

“Crucially they get to learn how people react when tired and stressed which is when, as a leader, it is crucial that you know yourself and can maintain focus.”

The frigate’s crew of 180 worked 24 hours a day to provide the weapons, sensors, engines and even the extra meals required to keep the training going, with many at work deep inside the ship and not seeing daylight for several days.

Other Royal Naval ships and aircraft formed a training convoy escorting and protecting a cargo ship serving an imaginary country under attack. The aircraft simulate enemy jets and missiles to provide the highest degree of realism as they repeatedly attacked HMS Somerset to test her defences. The ship is also expected to ‘fight’ while dealing with simulated fire and flood war damage.

Student principal warfare officer Daniel Gatenby, 33, said: “Despite the pressure, this week has been great. This went as close as possible to recreating the real thing. We really appreciate the effort that the ship has put into looking after the six of us.”

The advanced phase comes at the end of the course teaching warfare officers procedures, tactics and provides technical and legal training required to operate in a multiple-threat environment. 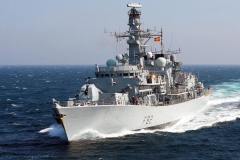 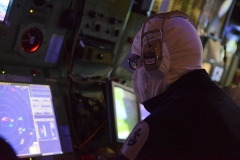