Two South West female naval medics have been honoured for saving lives on the front line in Afghanistan in support of Royal Marines and soldiers.

Leading Medical Assistant Lianne Spiby (25) served with Lima Company of Plymouth-based 42Commando and Leading Naval Nurse Sarah Morris, from the medical defence hospital unit at Plymouth’s Derriford Hosptial, have been working with troops out on the ground in the Helmand province of Afghanistan for the last five months. Today (Friday), having ended their tour, they were presented with operational honours at a ceremony.

The Duchess of Cornwall, as Commodore in Chief, Royal Naval Medical Services, presented campaign medals for service in Afghanistan to Royal Navy medical personnel. Her Royal Highness also attended a reception for the medal recipients and their families following the parade at HMS Excellent, Whale Island, Portsmouth.

She met Royal Navy and Royal Marine medics who deployed to providing trauma care and first aid at Camp Bastion hospital, where 3,600 patients were treated, and while accompanying more than 10,000 foot patrols across Helmand province.

Referring to her earlier service in Afghanistan Lianne said: “I didn’t expect ever to come here being in the Navy. It’s been a big shock to be taken out of the Navy world and dropped in to a land environment. The learning curve is massive.”

Leading Naval Nurse Sarah Morris, of Melksham, Somerset, said: “There is such satisfaction in my job and we see all manner of injuries come through. The five minutes it takes to get from the helicopter to the hospital is a crucial time where it can be make or break for the casualty.”

Surgeon Commander Jason Smith, the consultant surgeon in the emergency department at Camp Bastion hospital said: “Even though we have some prior warning of the patients coming in, you really don’t know how you are going to react until you are faced with the patient.”

As a patrol medic, on average Lianne would conduct two or three patrols per day, whereas the units she patrolled with only do one. Naval medics carry a medical rucksack which weights upwards of 20 kilos, and with their body armour, rifle, ammunition and water, the combined weight of their equipment can be reach nearly 50 kilos.

To ensure they were ready for their deployment, the training that the Navy medics get goes as far as possible to prepare them for the realities of working in Afghanistan. They undergo a specific training package at Royal Marines Base Chivenor, Devon, which includes three days dedicated to dealing with trauma patients. Lottie said “fortunately I haven’t had to deal with a major trauma while I’ve been out here, but if I did it would be vastly different from what I do at home.”

Lianne took on a training role for the more junior medics in her team in Camp Bastion. She said: “It’s always worst to see the local children coming through, but more than anyone they are very resilient and bounce back quicker than ever. They really are getting the best care in the world.”

The Navy lead Close Support Medical Regiment, comprises personnel form all three services but 75% are naval personnel. These personnel are taken from a selection of Naval units including ships and shore establishments as well as the Naval hospital units in Queen Alexandra (Portsmouth) and at Derriford Hospital. 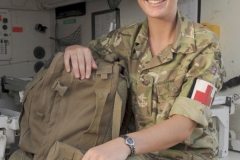