Plymouth-based Royal Marines are due to speed march 64 miles through Cornwall from Plymouth next month as part of their celebrations of the 350th anniversary of the Corp’s formation.

They are calling on villages and towns along the route to come out onto the streets and support them and donate to the Royal Marines Charitable Trust Fund (RMCTF) along the way.

More than 300 members of 42 Commando Royal Marines, based at Bickleigh, Plymouth, will be taking shifts in joining a core group of Marines who are running across the UK as part of this year’s Royal Marines ‘birthday’ 1664 Challenge. The route includes an abseil of the tropical biome at the Eden Project and a waterborne river-crossing.

The combined team will be running to Tavistock, Torpoint, HMS Raleigh, Liskeard, Bodmin, Eden Project, St Austell, RAF St Mawgan, Truro and Falmouth between Friday 6th June and Monday 9th June. There will be Commando-themed family attractions in St Austell Asda store from 1pm to 4.30pm on Saturday 7th June and in Truro’s Lemon Quay Truro at Lemon Quay from midday to 4pm on Sunday 8 June. A Commando display in the Quay will include weapons, vehicles, and food. There will also be unarmed combat displays starting on the hour, every hour. The runners pass through Truro at about 2.30 on Sunday 8th June. The Eden Project abseil is on Saturday 7th June at 2.30pm. Some of the Marines will paddle by canoe across the River Fal from The Rising Sun pub in St Mawes to the Prince Of Wales Pier St Nazaire War Memorial in Falmouth on Monday 9th June at about 2.30pm.

The main challenge is under way and the core Royal Marines Commandos team are skiing, sailing, cycling, canoeing and running 6,656 km, in four 1,664-km legs over a route covering Norway, Spain, France and the UK. The aim is to encapsulate the Royal Marines Commando spirit and Corps values in a significant physical and mental challenge. 42 Commando will be leading their leg.

Major Baz Lewis, officer commanding Kilo-Company, who is leading the 42 Commando part of the challenge,
said: “The 1664 Challenge is an extraordinary event, attempting to raise a huge amount of money for a very deserving cause. The Royal Marines, and in particular 42 Commando, have had a strong link with the Plymouth and Tavistock area for much of their history. So we hope people from the local area come and support the runners as they pass throughout Cornwall.”

Lance Corporal Ben Fox, of 42 Commando, is one of the runners. He said: “It’s a great privilege to do this on behalf of the trust fund which does great work for Royal Marines and families of Royal Marines who have been injured or fallen in the line of duty. It will be a physical challenge, but it is our job to be fit, so it is effectively ‘another day in the office’ for us. It’s really nothing compared with the sacrifices, including the ultimate sacrifice made by the lads in the frontline. It’s the least we can do to.’’

Marine Adam Mallard, 26, of Plymouth, said: “I’ve only been in the unit two weeks and this run is exactly the kind of challenge I wanted. I’m an ex personal trainer so I like to keep fit and there isn’t a better reason than to support other Marines and their families. I’m looking forward to the event.’’

The RMCTF is the Royal Marines charity, helping our wounded and injured, particularly those that have been most severely injured, to begin their transition back into civilian life; quite simply, the RMCTF will help when others cannot. The RMCTF will also help those still serving and facing successive tours in high threat environments – providing adventure training for those returning from operations, funding homecoming events, financing memorials and maintaining our heritage. 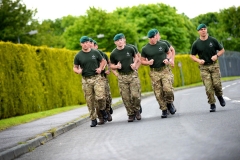