Royal Marines from the South West have stepped ashore in Sierra Leone to a warm welcome after arriving to support the international aid effort in the fight against the Ebola epidemic.

A large crowd of Sierra Leoneans came out to meet a small group of Royal Marines from Plymouth who stepped ashore to carry out survey work on arrival in the Royal Fleet Auxiliary ship Argus which sailed from Falmouth two weeks ago.

The men – from two Plymouth-based units 539 Assault Squadron Royal Marines and 42 Commando – went ashore at Lungi Beach, near the country’s main international airport. They met with residents who told them about the area and conducted an underwater survey to confirm beach gradients to check if suitable for landing craft landing.

Leading the small shore team was Sergeant John McDonald of 539 Assault Squadron Royal Marines. He said: “The reception we received was overwhelming; I’d say that more than 150 people met us when we landed on the beach. We explained that we were there to carry out survey work and they really wanted to help by providing us with local knowledge. As a result we managed to gather more information than we had expected about the local area, while at the same time we were able to deploy a sonar on one of the Zodiacs to confirm the suitability of the beach for landings.”

The Royal Marines landing party travelled in a landing craft and two Zodiacs before going ashore at Lungi Beach. Corporal Gavin Smith was at the helm of the landing craft. He said: “The response from the local community was really positive, and despite Ebola being a major issue in West Africa, it seems that life is continuing as normal. All of our commandos have undergone rigorous counter Ebola training and adhered to these measures while ashore.”

The Royal Marines will continue with survey work in different areas in order to assist their longer term logistical role in transporting equipment, stores and personnel.

The UK Military are working in Sierra Leone supporting DfID at the request of the Government of Sierra Leone in the international battle against Ebola. This is an unprecedented outbreak with the potential to affect many countries, and tackling the disease requires significant and urgent support.

The UK is leading the international response to the Ebola crisis in Sierra Leone by diagnosing and isolating Ebola cases more quickly, trebling the number of treatment beds, supporting burial teams and researching a vaccine. Playing our part in halting the disease in West Africa is the most effective way of preventing Ebola infecting people in the UK. We have pledged to match the first £5 million of donations to the Disasters Emergency Committee appeal.

In addition, the UK has committed £225 million to this disease. This includes: Supporting 700 treatment beds to help up to 8,800 patients over 6 months; shoring up the country’s stretched public health services to help contain the disease. This includes vital supplies such as chlorine and protective clothing for thousands of health workers; 200 community care centres where people who suspect they might be suffering from the disease can seek swift and accurate diagnosis and appropriate care.

The UK aims to quadruple lab capacity in Sierra Leone; support to charities on the ground to work with people to agree practices which will allow them to honour their friends and relatives, while ensuring bodies are safely buried; Help train 240 health workers every week; double the number of burial teams to 21 in Freetown – and provide twenty more across the country; supporting a command and control centre to manage burials and Ebola patients across Freetown and the Western area; provide cemetery management to all districts through World Vision and provide a training programme for improved community engagement and behaviour change for 1000 community mobilisers.

More than 800 military personnel will be deployed in total to help with the establishment of Ebola Treatment Centres and an Ebola Training Academy. Around 450 of these personnel are already on the ground. 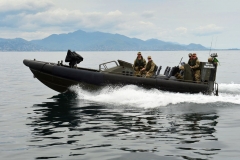 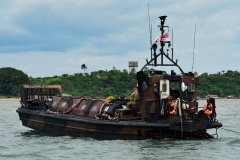 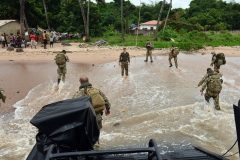