A South West Royal Marines Officer has been awarded a New Year’s honour for his work in forging international partnerships.

Lieutenant Colonel Tony de Reya is to be presented with the MBE later this year for helping train allies in common strategic security interests.

He is now Chief-of-Staff of the Royal Marines Commando Training Centre at Lympstone, near Exmouth in Devon, his second role at the centre. He has served across the globe since the early 1990s on operations and exercises, but most recently his achievements in defence engagement with other countries and mentoring the UK’s foreign partners has been rewarded with the Queen’s honour.

Tony said: “I am genuinely surprised and utterly thrilled to be awarded the MBE for my work at the head of a brilliant team of people from across defence doing a complex and difficult job working with allies from a variety of fascinating cultures. The most satisfying aspect of the period covered by this award was the absolute professionalism, flexibility and cheerfulness in adversity shown by the best people in defence that I worked with in the team.’’

Tony has worked with military partners in Africa, Arabia and Asia throughout the period recognised by his award and travelled extensively and frequently. He and his wife Samantha and their children Adam 14, and daughter Holly, 10, are pleased he will now be at home more regularly.

He said: “It was a fantastically rewarding job working on an international footing and I’m very excited by the opportunity to assume a new, more UK-focused role at Lympstone, continuing to deliver top quality training for top quality Royal Marines recruits, leaders and specialists.’’

Tony, 44, was first inspired to join the Marines after seeing the Royal Marines free-fall parachute team over his hometown of Newcastle-on-Tyne. He joined when a teenager after his bus broke down outside the recruitment office and wandered in to seek details. Obviously inspired by his first exposure to the Royal Marines, he looks back fondly to his six years as Secretary of the Royal Marines Sports Parachute Association, organising skydiving in America, the Czech Republic, Spain and the UK as part of the team building packages enjoyed by Royal Marines when not deployed on operations.

In his new job he claims to have more time to compete in and train for a full-length Ironman triathlon in Kent later this year. He joined the Marines to accomplish such challenges and said: “My career in the Marines has met and surpassed all expectations. Life in the Corps is as exciting now as it has ever been. In today’s security climate, the opportunities and challenges for tomorrow’s Royal Marines are as exciting and unpredictable as they have ever been: I’d recommend the job to anyone.’’ 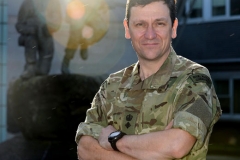