The crew of the Royal Naval submarine HMS Talent staged a special day to show appreciation to friends and relatives whose support helps them to remain operationally prepared.

About 130 friends and family attended a day to celebrate the 130-crew’s achievements with a formal parade after a recent homecoming from patrol. The submarine is affiliated with Shrewsbury, Shropshire, and the town mayor Councillor Keith Roberts was guest of honour.

The event gave the guests a chance to meet the whole crew including the submarine’s captain Commander John Aitken who will thank the visitors formally at the parade and informally face-to-face when they will also be treated to a cricket competition and barbecue.

Commander Aitken, from South Shields, said: “Successful submarines are borne of successful teams and that team extends not only inside the steel of the hull, but into the family home.”

The families day also provided information about contacts and support during periods of absence, and covers what the submarine is planning on future patrols and how relatives and friends can communicate, albeit in a limited way, with the sailors at sea.

The submarine had a busy year so far, with work-up and training in the UK at the start of the year followed by a deployment to the South Atlantic which included a visit to South Africa for a week. The time in between has included intensive maintenance periods.

The parade included an awards ceremony to recognise members of the crew who stood out for their contribution to the success of the deployment and for general excellence in the submarine service.

Chief Petty Officer Steven Mathews received the Long Service and Good Conduct Medal for 15 years meritorious service in the Royal Navy. Steven joined HM Royal Navy in April 1997 as a marine engineering Mechanic specialising in mechanical systems. He immediately volunteered for the submarine service, serving in HMS Tireless, Valiant and Trenchant before being selected for an engineering course in 2008. Since completing this artificer training CPO Mathews has served in HMS Talent, initially as a main machinery space supervisor then in his current role as a marine engineering technician of the watch. As head of the auxiliaries section, CPO Mathews has been instrumental in ensuring HMS Talent successfully completed its maintenance period and re-generation period on time.

Cdr Aitken said: “Throughout this very busy period he has been fully supported by his soon-to-be-wife, Elizabeth and son Charlie. A credit to his family and asset to the submarine service, CPO Mathews has a long and illustrious career ahead of him in the RN.”

Leading Seaman WS (TSM) Robert Carter-Lovell received the Man of the Boat Award, an award for his contribution to success of the submarine and its crew. LS Carter-Lovell, 31, from Plymstock, Plymouth, has been in the Royal Navy for 14 years with the best part of the last 7 years serving in Talent. One of the hardest ranks onboard any submarine is a leading hand where an individual has to maintain fairness and discipline amongst his juniors but still be respected within the junior rates. This becomes doubly hard when they take on extra responsibility for the junior rates, a role which LS Carter-Lovell has carried out diligently now for two years.

During the maintenance period Robert worked tirelessly with outside authorities to establish and install a complete multi-media system which benefits all the ranks when they are relaxing at sea. This was largely conducted by him outside working hours with his only aim to make HMS Talent’s crew’s intensive days at sea more enjoyable. He also took on the role of the submarine’s stationery co-ordinator, working hard to make sure all departments are kept up to date with their orders and delivery.

Robert, a father of three, said: “I am so proud to receive this award. I have been in the submarine for seven years and had time to get things right in the junior rates mess. We’ve just had an enjoyable deployment to South Africa and I’m looking forward to the next one.”

Cdr Aitken said: “He has given his all to Talent. For the most part awards are given to individuals who have done a great thing, but recognition should also be given to the people who make lots of small yet significant efforts that amount to a great thing. This award is made in recognition of his outstanding devotion to his submarine and his shipmates.”

The parents of Lieutenant Andrew Pariser (HMS Talent watchkeeper), Jacki and Philip, travelled from Alderley Edge, Cheshire, to watch their son on parade. Jacki said: “It is fantastic to see him in this ceremony. The last time we saw him at an event like this was about seven years ago when he passed out from Dartmouth College. He’s moved from submarine to submarine – HMS Talent to Vanguard and back to Talent – and somehow missed anything similar. It’s great that the navy does this for the families and the crew, to see where he works and who he works with. It’s real recognition that they deserve and all us families appreciate it.” 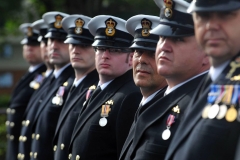 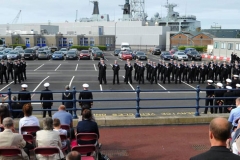