The 38 Navy medical staff, from HM Naval Base, Devonport, donned wellies and wielded spades and forks on a community project to prepare an historic fruit and vegetable garden for the winter season at Maristow Estate Walled Gardens on Maristow Estate north of Plymouth.

The aim was to strengthen their team and develop a long-lasting relationship between Jenny Tunley Price, who leases the 5.5-acre Victorian gardens, who has vowed to restore them to their former glory after taking on the project when in serious neglect.

Jenny, a former Royal Naval reservist and trained gardener, said: “It’s really thrilling to have the Royal Navy supporting me in this project. I really appreciate having former colleagues supporting me and at the same time as the community groups. The Royal Navy has brought its team work and enthusiasm as I would expect. I look forward to working with you all again.“

Medical Assistant Jordan Ayton said: “It’s really good for the Royal Navy to be involved in community work, doing something useful that benefits people worse off than ourselves. I hope we can come again and see the gardens working fully. This is also helpful for us, working outside our comfort zone with colleagues who we might not normally see directly on a daily basis.’’

The organiser of the event, Surgeon Commander Sue Schofield, said: “With so much work done electronically, stuck in offices, in separate buildings and behind closed doors, it is different for the staff enjoy the opportunity to get outdoors and work together in a different environment. The civilian and military team appreciated the beautiful rural location, learned new skills, supported each other and had a few laughs along the way.”

It is thought the gardens and associated cottage were built in the 1860’s to provide fruit and vegetables to Lord Roborough and the occupants of Maristow House. They eventually fell into disrepair during World War Two until

Jenny took on the on-going mammoth task of restoring them in 2009 with the help of volunteers and community projects (including organisations supporting young offenders and unemployed, improving child malnutrition and combating post-traumatic stress disorder). 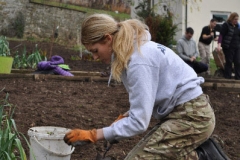 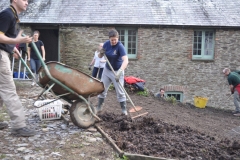 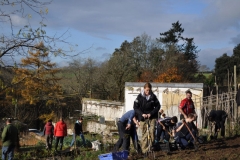 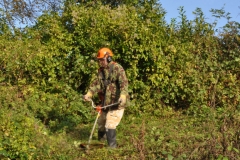